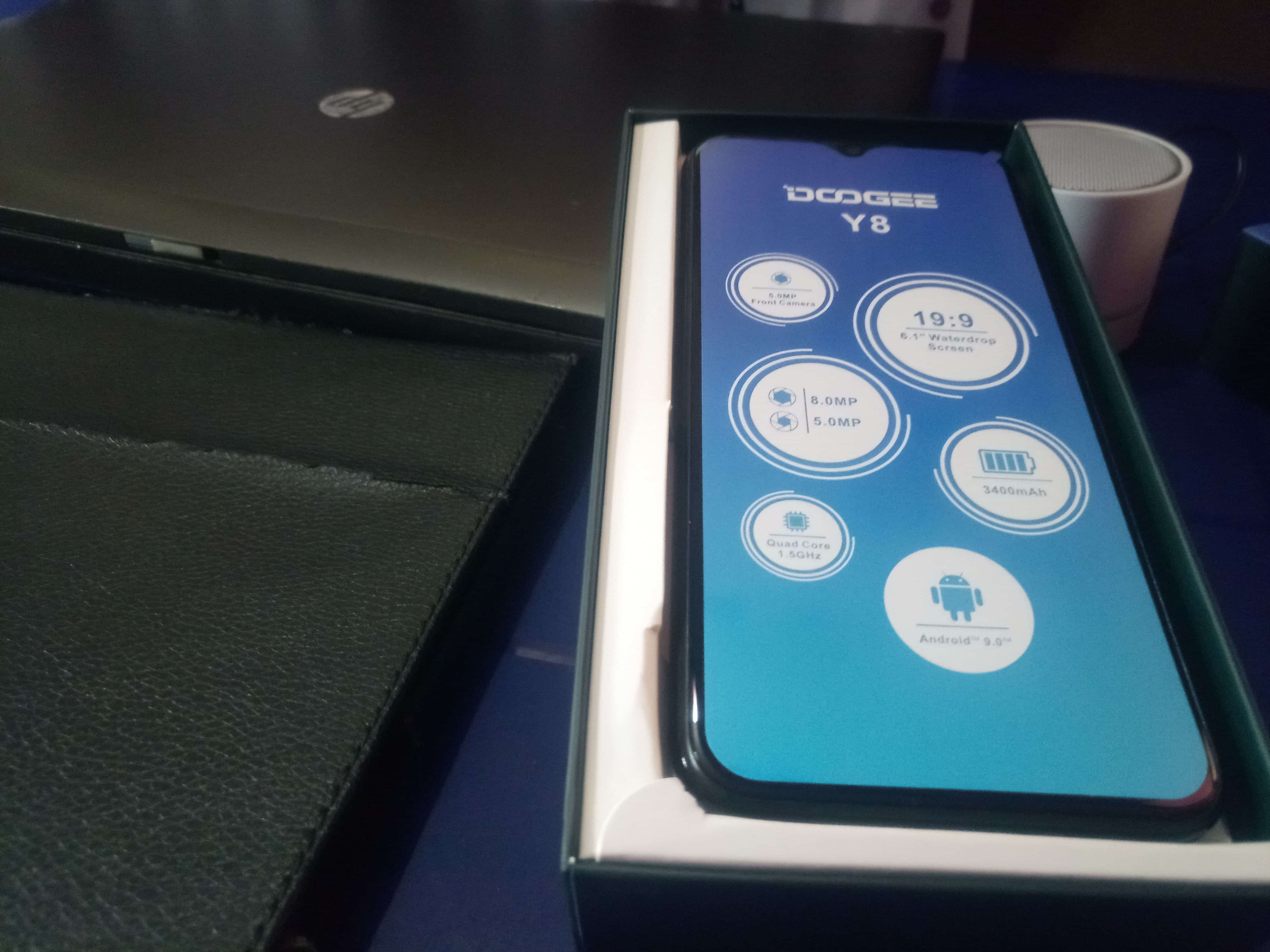 Updated: Doogee Y8 Review; a must read before buying

DooGee Y8 is a stylish and attractive smartphone with entry-level specs that match with its price. It functions quite well and the display is excellent. This smartphone satisfies the need for a secondary mid-range smartphone and you’ll find its features interesting.

Doogee Y8 is a good mid-range smartphone launched in 2019. It is sold below $100 and comes with quite a lot of specs you would not believe it would pack. The device has a stunning display and the aesthetic looks very attractive. Doogee Y8 is available in different colors that would blend with your style perfectly. I got this device a few weeks after it was launched and here is my DooGee Y8 Review. Just like I have written about Blackview A30 and Oukitel C8, this review will be detailed and comprehensive. 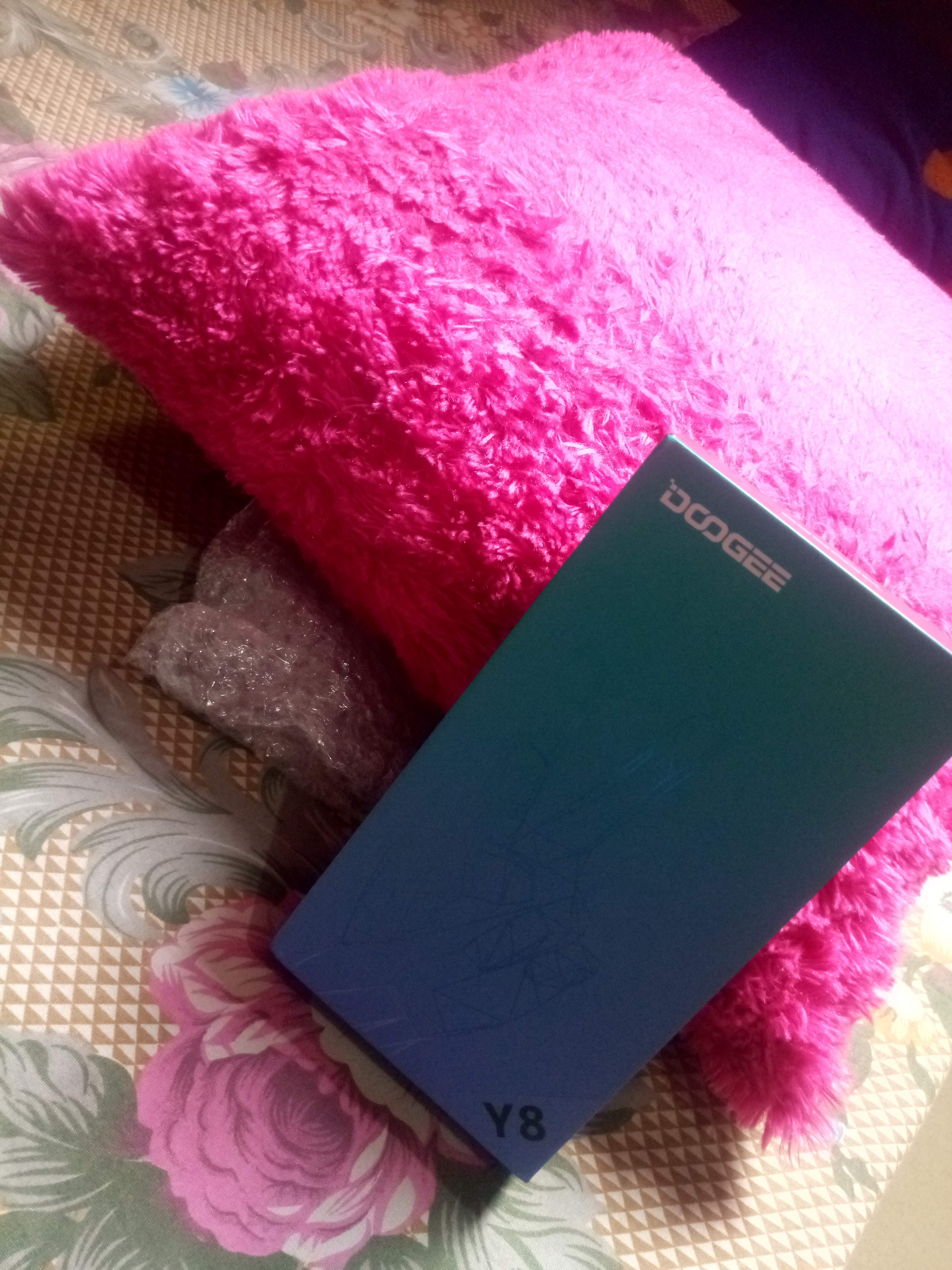 To start with, this device runs on Android OS 9.0 with March 2019 security patch. Unlike most other smartphones, DooGee does not have any custom OS. Inside the hood of this device lies a whopping, efficient 3GB RAM alongside a 16GB internal storage space. While you can further extend the storage of this device; you can only achieve this by sacrificing one of your SIM cards if you have two. Yeah, this is because DooGee Y8 supports two nano SIM or one nano-SIM and a TF Card.

Critical Update: I withdraw my recommendation; Doogee Y8 is practically a shit packaged in a nicely designed aluminum frame!

From the first day I unboxed this device, I noticed that the touch (sensor) isn’t responding well; but I swallowed that, hoping that other aspects of the phone would be working fine. A few weeks of using the phone and camera went very bad; you can’t even scan a QR code with the rear camera. I tried scanning the QR code to use WhatsApp web on PC but to no avail. That’s for the camera.

After about 3 months of using the phone, the screen started pulling out, and after about 2 weeks, I took the phone to a technician to glue back the screen, but unfortunately, the screen was already damaged. I had to order a new screen from Aliexpress. Luckily, I ordered the screen on 11-11 shopping day and it arrived about 3 weeks after. I fixed the screen and the device started working again.

I was hoping that this new screen would correct that sensor (touch) issues, but hell no! The touch was still faulty. I’m a die-hard fan of Dream League Soccer game but I couldn’t play it on this device because the sensor is bad. Also, asides for gaming purposes, the touch (sensor) of Doogee Y8 is a complete mess and annoying.

Oh! I forgot to mention that I contacted the support team severally via e-mail and i never got a reply. I also contacted them via Twitter and got a response, but they never helped me out.

Well, cutting the long story short, I AM NOT RECOMMEDING THIS PIECE OF CRAP! Below is my initial unboxing and review of DooGee Y8. 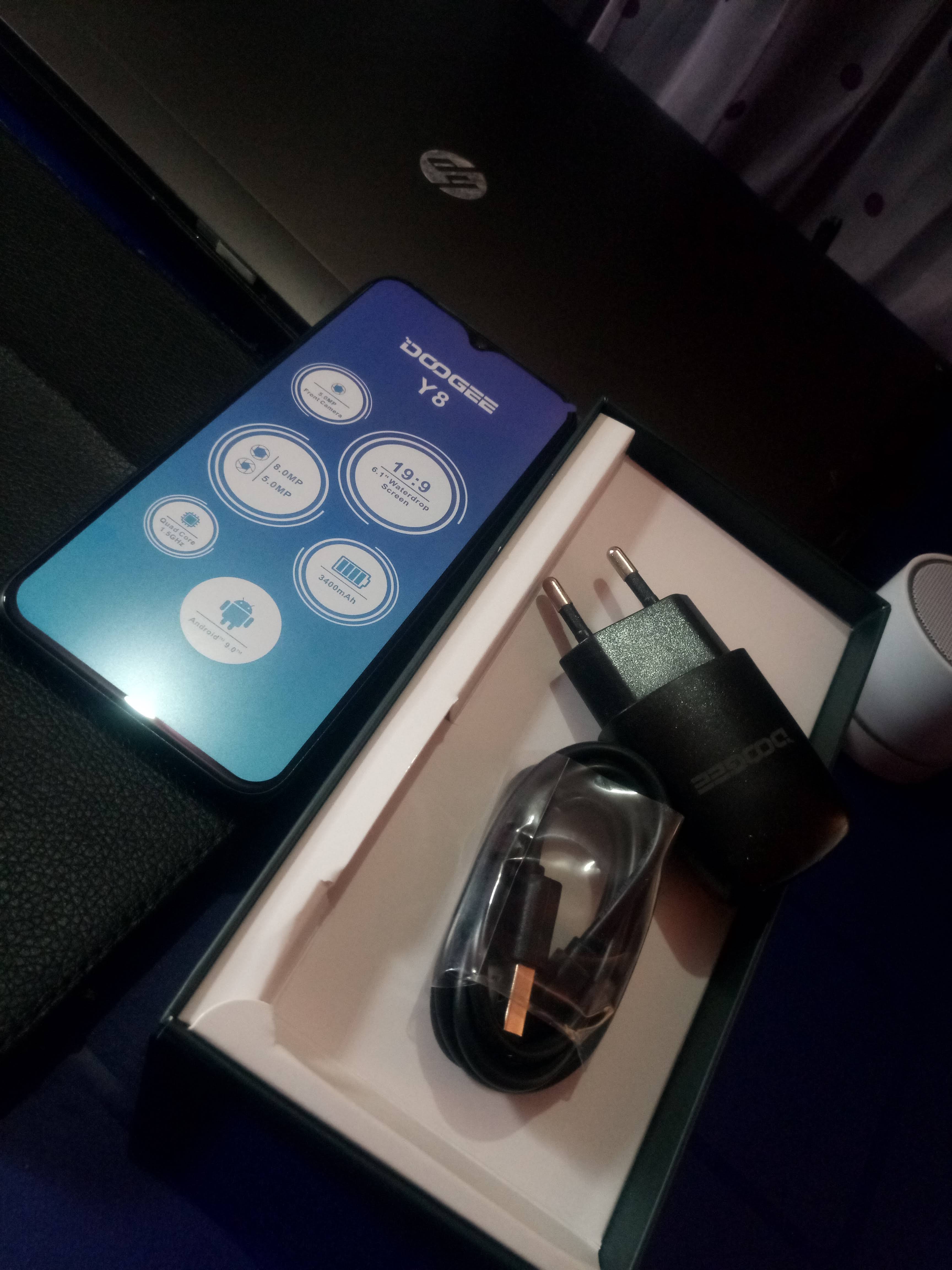 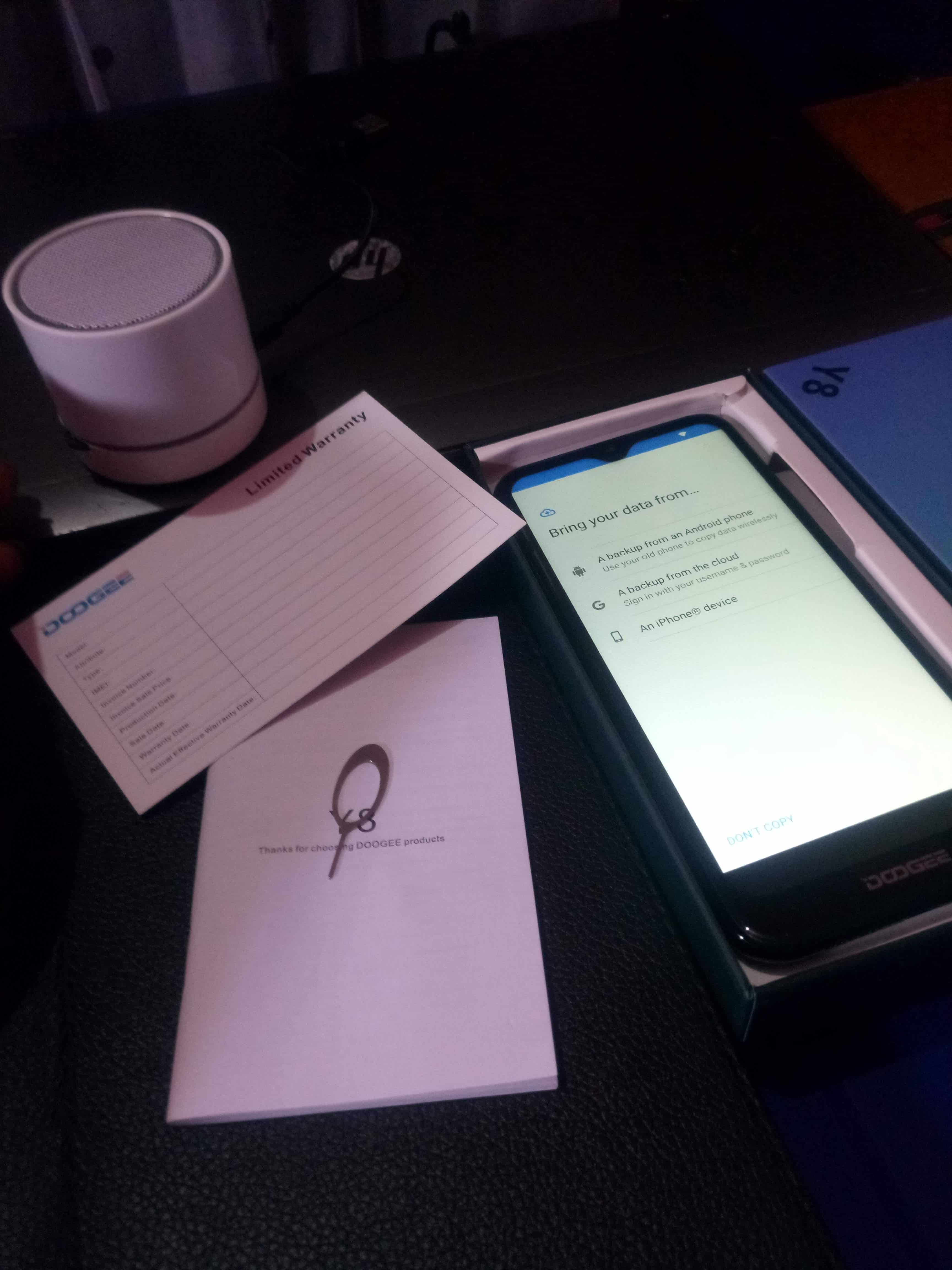 Here are the things you’d find inside the box with your smartphone – DooGee Y8.

There are no screen protector firm and body case included in the box; that’s not good.

Related Topic  Oukitel C8 review and unboxing: should you spend on this?

DooGee Y8 flaunts an attractive design which is quite irresistible. It is slightly curved at the edges and with the headphone jack (3.5mm) situated at the top panel and the charging port fits at the bottom in the middle of the device speaker openings. This smartphone is very light in the hand, and irrespective of the 6.1″ screen size, it fits into the palm very well.

Interestingly, this device supports 4G LTE and it is available to the dual sim cards you will insert on this device. The network speed is convenient. However, the device tends to heat up when you leave data connection on for a long time.

You are allowed to either use two Nano sim cards or one Nano sim card and a compatible memory card. DooGee Y8 does not have a dedicated card slot.

There are dual rear cameras situated at one edge of the device. The cameras are 8MP and 5MP respectively. Photos shot with this device were quite clear in the day time. But, even with the dual cameras, this device doesn’t provide excellent shots in low light environments or at night. It does features LED flash, still, the camera delivers poor shots.

A 5MP front camera is also available on this device; it supports wide-angle, and because of the notch-less display screen featured by this device, it does not feature front camera flash; instead, the device uses screen flash to throw more light and capture shots with the front camera.

All kinds of media play on this device as it supports a wide variety of media formats which includes popular formats such as MP4, MP3, WAV, etc.

Well, just as I expected, this device hides out a set of MediaTek chips inside its hood. The quad-core CPU works quite well, coupled with an efficient 3GB of RAM and 16GB of primary storage. DooGee Y8 runs multiple tasks almost flawlessly; however, I’m yet to get a better gaming experience because its GPU is quite poor.

The DooGee Y8 runs on Android 9.0 (Pie) which is the latest Google Android version up to this day. Also, it comes along with March 2019 security patch, and you can run all possible Android Pie tweaks on the device.

With a 6.1-inch screen, I’d say this device comes with a screen that allows you to see everything in details. The resolution is acceptable at 600 * 1280 HD for a smartphone of its level. Interestingly, the 2.5D slightly curved screen is a waterdrop screen, this means that the device screen won’t be affected by water splash.

It comes with a 3400mAH Li-Polymer battery and it is a non-removable battery. The battery lasts quite long but on a 4G or 3G network connection, it runs down quite faster. Y8 does not support any quick charge technology; the battery gets fully charge from 0% in 2hr30mins.

This smartphone supports Bluetooth connectivity as well as comes with WiFi support. It does not support infrared and as such, you can not use this smartphone as a TV remote unless you attach an infrared blaster.

Related Topic  All you need to know about the Infinix S3; Features, Specs, Price 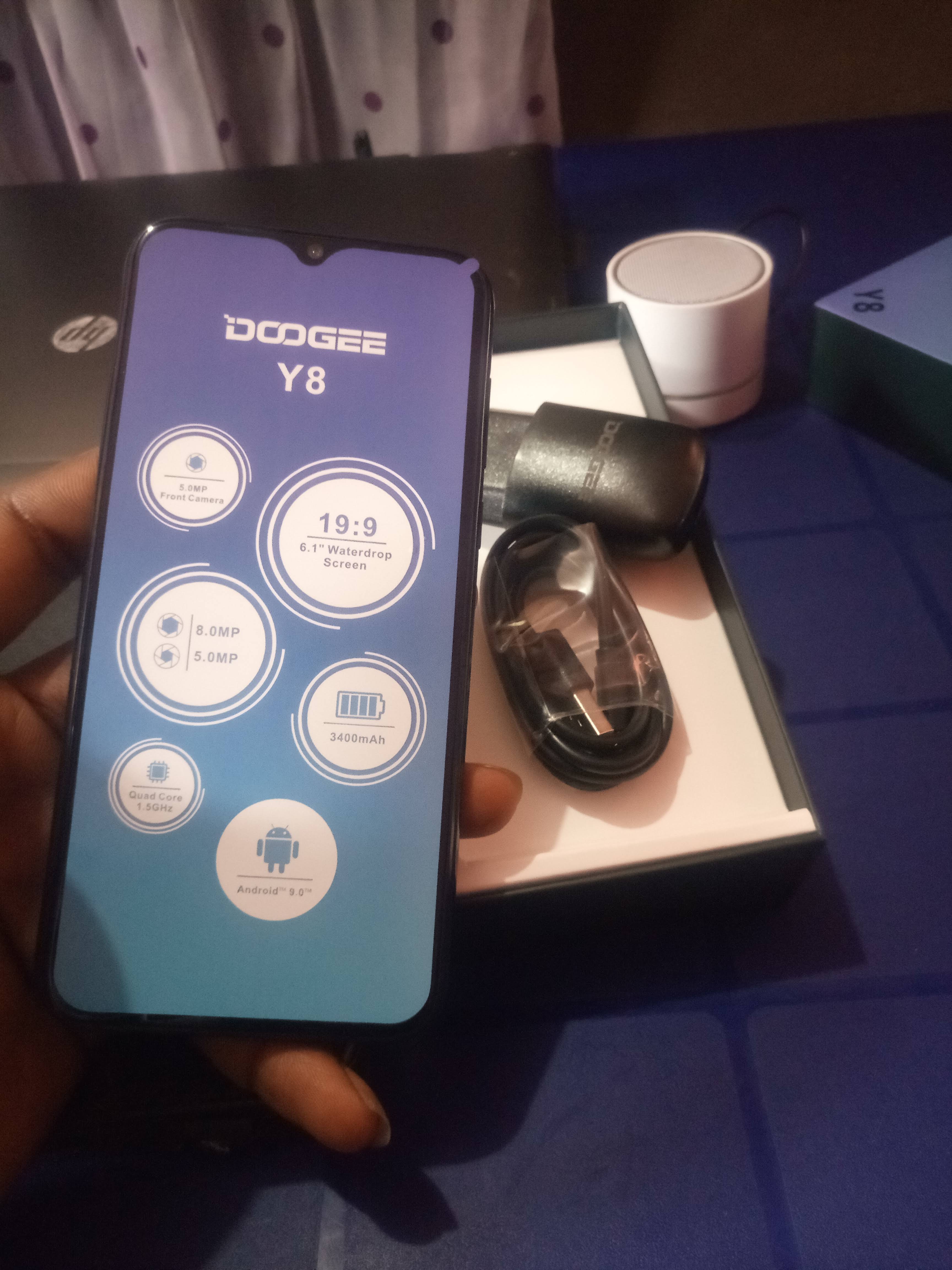 Where to buy DooGee Y8 smartphone?

DooGee Y8 is a sleek, mid-range Android 9.0 smartphone launched in 2019. It features notch-less display, comes with a whopping 3GB of RAM and is sold at a discounted price.

DooGee Y8 is quite a stylish smartphone that looks expensive when you sight it, but, when you get to know specs, you’ll consider it one of those mid-range smartphones with cute aesthetics. It functions really well but for some flaws in the camera, fingerprint, and battery. Yeah, the camera isn’t so good as you may think, and the battery runs down faster than you can imagine (especially when your data connection is active). Well, the fingerprint sensor is efficient but it sometimes acts like it forgot your fingerprint, and thus, you have to try an alternative login.

This is my DooGee Y8 review, I have used this device for quite a long time now and it has not given me any concern. Apparently, I will update this review if the device faults, just like my Kimfly M6.

This post has been updated, carefully read check the “Update.”

Expect these high-end smartphones to launch amidst coronavirus pandemic