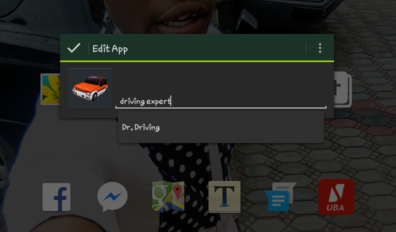 Looking for how to change android app icon and name? Android is the most used mobile OS; this is because is an open source OS that let you perform a lot of tweaks on a smartphone running on the system. Today, I’ll be sharing an idea of how you can change or disguise your app icons and names on the app drawer window. I’ll be using the Nova Launcher app for this tutorial although there are other launchers and apps that let you do this too.

This is a fully customizable Android smartphone launcher with lots of features you’d love to explore. You can get on Google Playstore for free. Nova launcher provides you with a lot of options to gain full control of your smartphone and customize it to your taste. It is one of my best mobile apps of all time.

Things you can do with Nova Launcher for Android

Install the application from Google Playstore. I do not recommend other apk hosting websites because there are lots of insecure ones out there.

Once the app is installed on your Android device, launch it and set it as your default launcher. Then, follow the guide below;

open your app drawer, press and hold the app you wish to change its name.

Note: If you activated “Desktop lock” when setting up this launcher, you’ll be required to long press the padlock that appeared on your screen to allow changes. Screenshot below. Press, hold and drag the app to the “edit” option Input the name you wish to use and click on the (√) icon. Your edit will be saved and that’s all. The app will bear that name as long as it is still present on your device.

How to change your Android app icons with Nova Launcher

Follow the same steps from above, but this time, you’ll have to click on the icon and then choose an image/picture from your device to replace the original app icon. Share with others on:
Related Topic  How to Design your Company Logo
Android Launchers